Both Lives Matter | Blog | My Body My Choice

One of the claims of the pro-choice movement is that the unborn baby is a part of the mother’s body and that in having ownership over her body the mother has a right to do with her body as she chooses. Associated with this is the view that the unborn child is not a person and so not subject to the same moral right to life as the mother in which case there is no moral problem with ending its life. We will explore both of these outlooks in this blog.

Part of the Mother

A human substance is itself a composite entity composed of many parts. The pro-choice reasoning suggests that the unborn child is just another one of those parts, in which case the unborn child has the same moral status as any other component part of the mother. If that is true, termination of the pregnancy does not destroy an individual human substance, and so is morally permissible. But this raises problems.

If the child were simply a part of the mother’s body, then the addition of it to her body would entail that the mother ceases to be the human substance that she was and is in turn transformed into a new substance, call it a pregnant substance. To illuminate this let’s return to the water example. Water is H20; two part hydrogen, one part oxygen. If we add to that another oxygen atom, we have two hydrogen atoms and two oxygen atoms H202; this is no longer water but hydrogen peroxide. The addition of some part to an already constituted substance entails a transformation of the previous substance, and this is the case even if the addition is as miniscule as a single atom.

If the child were merely a part of the mother’s body, then the addition of it to her body would be like the addition of another oxygen atom to H2O, i.e. it would transform the mother into something else. But this is not what happens in pregnancy. When a woman becomes pregnant she does not substantially change and become something else; she remains a human substance and only accidentally changes so as to accommodate the pregnancy. This means that the child is not part of her body even though it is dependent on her body. Consequently, what exists in the womb from conception is an independent self-developing human substance, and not a part of the mother’s body. Hence, it has a moral status independent of the mother’s. 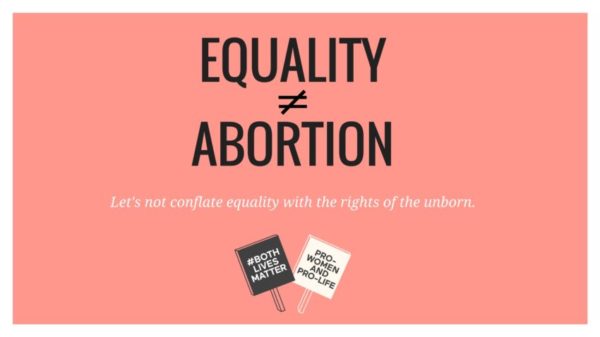 The Right to Life

So what moral status does the unborn child have?

So to return to our water example, water is H20, that is its form, it has component parts put together in a certain way; if its parts were put together in a different way, e.g. H2O2, it would no longer be water but would be hydrogen peroxide. Whilst water is H2O it can exist in various different states all the while being H2O. For example, it can be frozen in a solid state, but at room temperature it is in a liquid state. Hence difference of state does not entail difference of thing; the same substance can subsist and display different properties throughout its states.

Insofar as a person is a certain kind of substance, it is put together in a certain way. Now on the basis of its form, a person can perform all sorts of activities depending on the state in which it is. So a fully mature person can think and deliberate given the right dispositions such as wakefulness, sobriety, health etc, but such a mature person cannot do so, if in a different state e.g. asleep, drugged, serious ill-health.

With thanks from all of us at Both Lives Matter to our guest author, Dr Gaven Kerr.

Gaven  has authored a number of peer reviewed articles on various issues in philosophy, and has published a book with OUP, Aquinas’s Way to God (2015) with another forthcoming with OUP in 2019. He is a member of the Dominican Order, and works for the Christian think tank, the Iona Institute.

The views and opinions expressed, are those of the author/s and do not necessarily reflect the official policy or position of Both Lives Matter.