I had an abortion when I was 21. I had been in a long term relationship with my boyfriend for three years previous but it wasn’t until we had split up and were ‘seeing’ each other that I fell pregnant. By this point he was now my ex-boyfriend and he was going away for 3 months. I found out that I was pregnant when he was away. I recall calling him and telling him that I was pregnant.  He was very adamant that he was going to support me and there was absolutely no option of me having an abortion, “My mum will help us with looking after the baby”.

I was VERY sick during the pregnancy, I had recently started a new job and had the stress of worrying about finances as I was just short of my probation period and didn’t qualify for sick pay. Thankfully in the midst of such confusion my company were very supportive and went way beyond the duty of care and even offered for a member of staff to come visit me and attend appointments with me if I needed her to.

I was getting sicker by the day, I couldn’t hold anything down and even the smell of certain aromas had me gagging! I was in a bad way but with each passing day I longed for my ex to get home, to wrap his arms around me and tell me everything would be ok, “not long now, he will be home soon!”

On the day of his return I anxiously waited by the phone, waiting for his call. The hours passed by and by evening I still hadn’t heard from him “maybe he’s tired, got jet lag and taking a rest”. He didn’t call that evening and he didn’t call the next day either! I finally decided I would call him and he said he had been ‘busy’ but would come over and see me. I was so not prepared for the bombshell that he was about to drop on me.

“See, when I was away I met somebody, I met ‘the real thing’ so I’m sorry but I can’t support you with having this baby, but I’ll give you money”. Yes that’s really what I needed to hear! Money was the last thing I was wanting from him in that moment. All I longed for was for him to put his arms around me, to give me a kiss but he wouldn’t touch me. He had to be ‘faithful’ to his new woman.

My dad had just had a mini stroke, both my sisters had suffered from post-natal depression, as had my mum, so I had this war going on inside of me, a fear that such would be my fate, that I wasn’t capable of being a good mother. Then the seeds  of abortion were planted when I told a friend and she told me to “get rid of IT”

Abortion began to feel like a way of escape, I wouldn’t be a good mother so why go through with having the child? That was the daily dialogue I was having with myself, but deep down I felt like a mother, I even began to talk to my baby; fear was driving me in a direction that I didn’t want to go but I felt powerless to take back control of my life. I gave into fear and the doctor arranged an abortion for me, but I had absolutely no intention of having it!

I went to the hospital that day, with my “just get rid of IT” friend in tow. One thing I will never forget is walking onto the ward and discovering that we were actually on a labour ward. The nurse who dealt with me was very brash and insensitive, I could feel her judgement as it  manifested in her body language as she flung my medical records onto the bed. This only confirmed that I was not meant to be there, in the end I decided I couldn’t go through with it and went home. “I can do this! I am going to have this baby!”

With a spring in my step I went home and rang my ex and told him that I had decided to go through with the pregnancy and was not going to have an abortion. He went silent then said “well, I’ve been talking to my brother and I think it’s best that you get an abortion, I’ll pay for it because I really don’t think it’s a good idea for you to have this baby”.

In that moment my world crashed around me, I thought he would at least support me through the pregnancy, as when I first spoke to him abortion wasn’t an option! So there I was, I felt that I was back to square one again. Again the thoughts of inadequacy began to flood my mind, I was SO confused and could not see how I would get through this. In the end I gave into fear. Reluctantly I went back to the doctor and he arranged for me to go back to the hospital, I felt this was my only option. I had the abortion and from the minute I woke up I was regretting it. I felt empty, lost and confused. 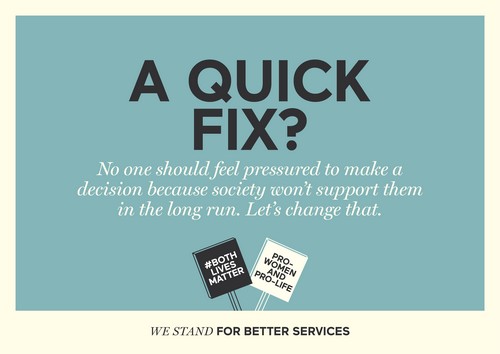 I became a Christian, I had been to church a few times before the abortion but hadn’t taken it too seriously. I was so blessed to have people from the church contact me, I felt so ashamed of what I had done and didn’t believe I was ‘worthy’ to go to church. They were so kind and loving and helped on a journey to recovery. My faith then supported me through a really difficult time, I felt I was over it until a few years ago when I was in a situation that made me realise that it would be good for me to go through post abortion counselling. I went for the counselling and I am so thankful. I will never forget my child but I have come to terms with what’s happened with Gods grace.

I will be 40 this year and I do not have any children yet. I pray and hope that I will meet somebody special and have a family, but it’s not guaranteed. At 21 it never occurred that I would be childless at 40 I ‘assumed’ I would be married with children.

One thing I would say to any woman considering abortion is – do not take life for granted. As women we assume that there will be another chance to conceive but life is unpredictable and what if this is the only opportunity you have in life to conceive…..