We would love you to meet Grace, a bubbly and vivacious teenager.

Like most girls her age, she leads a full and active life with a hectic social calendar disrupted only by the school exams!

She is also a sweet and extremely caring, thoughtful girl with a genuine interest in people. Meeting her for the first time, you can’t help being struck by the warmth and charm of her personality. Grace has a knack of leaving you with a lasting first impression.

And as her parents, our first encounter with Grace was no different and one we would not forget.

It was at the 20-week scan, when all seemed fairly routine at the start. To that point, even my pregnancy had been the best of the three so far; as with the previous two I had been extremely sick and even hospitalised with hyperemesis. Given our excitement, we barely noticed the scan was taking slightly longer than usual. Just when I thought it must be nearly over, the radiographer politely excused herself from the room. Returning a few minutes later with another radiographer, the scanning resumed with renewed concentration. Sensing that the mood in the room had changed, I asked if everything was okay to which the reply came back, “I’m afraid we’ve picked something up on your scan.”

Almost immediately I could feel my heart beating faster as she began to explain that they had noticed some fluid around the baby’s head. They weren’t sure what it was but said they would get a Doctor down straight away to have a look. Leaving us alone again, our minds were reeling as we began to fear the worst.

Though it seemed to take forever, it probably wasn’t long before the Doctor arrived. And after more intense scanning she solemnly explained that the baby had a large pocket of fluid around her head. So it was another little girl, but it was hard to celebrate as she went on quickly to describe the fluid sac as potentially life threatening. She had also noticed the baby had a heart defect, and couldn’t be sure if everything else was normal. In 30 dizzying minutes we had moved from being a routine to a high risk pregnancy, needing to be transferred urgently to the main hospital in Belfast. By this stage I was really struggling to take in what we were being told. My head was spinning and my heart just kept beating faster and harder. Thankfully my husband was with me, not only for moral support but for confirmation of everything that was being said.

Writing down the medical name of the fluid sac, Cystic Hygroma, we were warned to be careful about what we read on the internet over the weekend.

She then said something that rang in my head for the rest of the pregnancy and to this day ever since. I’m very sorry but this little baby will not survive.

I could almost feel my heart breaking inside and I was instantly filled with a fear that never left me. Leaving the hospital with very little information other than a daunting medical term and a hopeless prognosis, I felt overwhelmed by a flood of questions about the immediate future. Was this little baby going to die inside me? Was my own life at risk? If she did survive to birth, how long would she live and how would we cope? It was terrifying. We felt that there was no-one to turn to for answers. We wrestled with these fears that whole weekend, seeking the sanctuary of familiar surroundings at Whiterocks on the North Coast.

During our emergency appointment in Belfast the next week, we met with the geneticists first. They explained that the fluid could be caused by one of three things. Taking us through each possibility, we were relieved to hear them talking in more positive terms. It was like we felt a glimmer of hope each time they referred to our baby. They suggested we could wait until our baby was born to find out what exactly was wrong. All of this came as a huge relief as it meant an amniocentesis was not necessary; knowing this could increase the risk of miscarriage.

Later when we saw the obstetrician, we were faced with a totally different approach and medical opinion. The tone became very clinical, referring to the foetus rather than our baby. This confusing disparity in approach between two strands of expertise was to continue throughout the pregnancy.

Not that we knew it at the time, but our rollercoaster had begun.

He felt that I certainly needed an amniocentesis, to be sure of what was wrong with our baby. They needed to know “…what they were dealing with!” And I needed to decide quickly, so they could help me, “…because at 21 weeks, time was running out!”

I can only describe his attitude as incredulous, when we tried to explain that we were not in favour of an amniocentesis due to the risks.

The contrast between the two consultant’s approaches, in only a matter of minutes and in the same building, seemed mind blowing and impossible. Yet again my head was a whirl of information, thoughts and emotions. And as we left their department, after being corralled into getting an amniocentesis, I could hardly take in what had just happened. I couldn’t even remember if he had said to phone for the results or they would phone me, or how long it would take to get them.

It was another anxious three days waiting to hear the outcome of the amniocentesis. The geneticist phoned to confirm that our little girl had Turner Syndrome; a random chromosomal abnormality affecting 1:5000 live female births.

For the next 4½ months the rollercoaster seemed relentless. Every week was filled with Doctors appointments; obstetricians, geneticists, cardiologists, midwives and GPs. It became exhausting and mentally draining.

During this time, however, the possibility of an abortion had been mentioned several times by some of the doctors. Even at 32 weeks, I can recall a Doctor querying why I (having found out early enough) had decided to continue the pregnancy. Sometimes we found it hard to not be angered and offended by the apparent indifference of the suggestion. Was ours not as important as a normal pregnancy? Or worse, were we even wasting their time?

Yet for us, to have an abortion was not something we had ever contemplated as a result of our faith. We believe God had known Grace long before we knew about her. That He had a plan and a purpose for her life and ours. For us, this was more than enough to give us hope that Grace had a future and we should do everything we could for her. 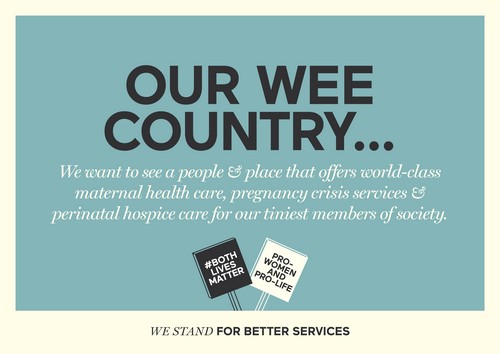 At every appointment we clung onto every up-beat word, every positive result always seeking for hope and reassurance that Grace was still there, still alive, still fighting. And, as the pregnancy progressed, Grace seemed to take small steps in the right direction. At 28 weeks, a detailed foetal heart scan (whilst confirming structural abnormality) showed her heart beat to be strong enough for the consultant to be very optimistic. The pocket of fluid around her neck dispersed gradually and completely before she was born. And after so much stress and fear of the unknown, her birth was precious and uncomplicated to the point of being almost textbook.

In a continuation of the contrasting approaches, apart from the geneticists, none of the doctors who had seen me, us, during those months of care came to see Grace after her birth to reconcile the diagnosis with the now born, baby girl. I remember well an appointment with the same geneticist who had spoken to us during the pregnancy. He was genuinely amazed and so happy to see Grace tearing around his office like any normal two-year-old. And, on reading over her medical notes, being bewildered by some of the things that had been said to us and were written… “Check Viability” ……… Check!

Undoubtedly, Grace’s Turner Syndrome has left her with a lifetime of focussed medical care and attention. Her early years were particularly challenging, beyond what we might have imagined. She attends numerous appointments and has had several operations each of which she faced with unstinting bravery.

So when we look back to that day at the 20-week scan, we can see how our (and our family’s) lives have changed forever.  But we can’t imagine life without Grace – our daughter, who we were told would not survive. We truly believe her unique character and determination that we see in her today, was also evident in the womb. We are so proud to be her Mum and Dad and so humbled to have her as our daughter.

We are told that the probability of Turner Syndrome is around one in five thousand. But we now know that Grace is one in a Million!